…who would have thought the old man to
have had so much blood in him?
—Macbeth Act 5, scene 1

When I went to give blood yesterday, I learned that it was my 22nd donation. That’s 11 quarts! I became a regular donor several years ago more or less on a whim. Stopped at a traffic light, I saw a sign for the Red Cross and remembered the transfusion I had needed back in 1994.

Giving blood, as it turns out, is pretty easy for me. I can answer the blood donor profile questions without embarrassment, I am blessedly free of needle phobias, I have a big fat vein that a nurse can hit first time every time, and I’m big enough physically that I don’t feel much in the way of after effects.

My patience, however, was sorely tested yesterday. The nurse I got (I’ll call him “Chuck”) was obviously new to the job and managed to combine a novice’s incompetence with a natural inclination toward officiousness in a way that left me out of sorts (and in some real physical discomfort) for hours later. 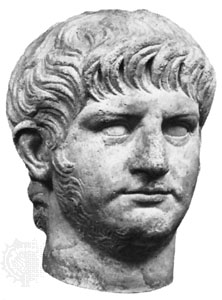 I had a 1:30 appointment at the Red Cross, and when I got there the place was practically empty. I zipped through the paperwork with my usual elan, but things went downhill rapidly as soon as Chuck got hold of me.

Now I really do try very hard not to judge people on the basis of appearance (yesterday’s rant notwithstanding), but I’m only human. Chuck was a moon-faced fellow with an imperfectly realized Van Dyke beard and mustache. To compound matters, he had coiffed himself with ringlets that ranged damply across his forehead in the manner of the emperor Nero. But I could close my eyes on all that.

The real problems with Chuck were his lack of skill and his “bedside manner.” Typical Red Cross blood drive staff members can set up a blood draw in about 30 seconds. Chuck took the better part of 10 minutes. He poked and prodded; he hitched and released various hoses, lines, velcro tapes and other assorted gear; he twisted me this way and that; he set the IV itself as if it were an interrogation device. I half-expected him to waterboard me. When I flinched at one point, he said, “Oh please, sir! I’ll have to ask you again not to move that arm!”

In eight weeks or so, however, I’ll be back for another donation. Chuck will have improved or he will be gone. By the end of the year, I will have crossed the gallon mark. That really is a lot of blood.