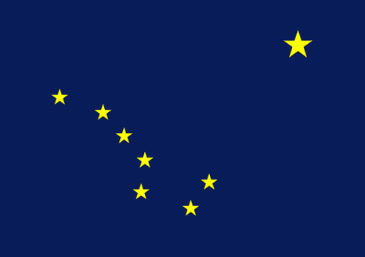 have a sense of direction. I spent a lot of time looking at the Big Dipper anyway, and in time came to think of the rest of the stars in the sky as somehow less important.

There are thousands of stars visible to the naked eye, but whenever I heard the words “night sky,” I would think “Big Dipper.” In time, the two phrases became very nearly synonymous. Where once I had looked up into a dizzying field of unknowable points of light, I now had a pattern. The stars Alkaid, Alcor/Mizar, Alioth, Megrez, Dubhe, Merak and Phecda told me about the sky.

Merak and Dubhe were the pointer stars that guided my eye toward Polaris, the North Star. I would know how to find Polaris on cloudless nights, if I ever happened to have any idea why I would want do do that. I felt that I had learned something valuable nevertheless, and I was quick to point out the Big Dipper at every opportunity. The stars I’ve named are precisely those that appear more or less to scale on the Alaska State Flag shown here.

I thought I had learned something impressive, and everyone I knew agreed with me. The sky, however, is large; and I had stopped seeing it, except for the Big Dipper. Still, I fancied myself quite the little astronomer with no appreciation for what I didn’t know. I didn’t, for example, know that the Big Dipper is, technically speaking, an asterism, a group of stars that make up part of a constellation, in this case Ursa Major. In its own right, the Big Dipper isn’t a constellation at all!

I’ve been reminded of this long ago stargazing in recent months as political discourse has become more and more polarized. I think of it particularly often when confronted with single-issue zealots. Apparently, for example when Second Amendment proponets hear the word “Constitution” they think “guns.” Now, after the tragedy in Tucson, the Second Amendment chatter is heating up again. The gun control issue, however, is complicated and important; and the Second Amendment is not the Constitution, any more than the Big Dipper is the sky.

Congress has a multitude of issues it ought to face, but we are suddenly hearing about almost nothing except “the deficit”—never mind that a great many of the people howling about “the deficit” don’t have any idea what it really is, what it really means, and what might help reduce it. Knowing that there is something called “the deficit” has become for too many Americans synonymous with understanding government. Whenever anyone mentions another issue, a certain kind of conservative says, “Yes, but we’ve got to rein in spending, and we can’t raise taxes to do it.” This is chapter and verse from the media constellation Limbaugh-Beck

The simple truth is that, just as there are many, many constellations in the sky, there are many, many important issues challenging our government and our society. Dismissing all questions but one, and allowing only one possible answer for that one question, is a lot like reducing the night sky and all of astronomy to the Big Dipper.