Every New Orleans resident whose home was flooded or otherwise damaged by Katrina has faced wrenching decisions about whether to leave or stay, what to rebuild, what to abandon, when to do or not do anything and how to pay for whatever decisions are finally made. 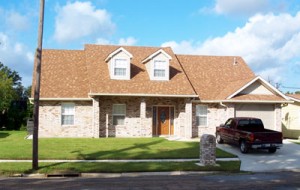 From the vantage of our group’s work site on Pauline Drive in Gentilly Woods, we easily found examples of many of the ways these decisions have played out.

Pauline Drive runs north and south, parallel to and west of the Industrial Canal. The house we worked on is on the canal side of the street and faces west. The house directly across the street, shown here, seems to be completely new, right down to its immaculately manicured lawn. I have no idea who owns the house or even whether there was anything on the lot before Katrina.

The neighborhood shows lots of signs of work in progress, but this house stands alone in its newness and completeness. My friend and fellow volunteer Tom has years of experience as a real estate appraiser. Who, he wanted to know, would build this house in a neighborhood so damaged that its survival may still be uncertain?

It’s a fair question, I think. The only plausible answer I can think of is that the house was built by someone who wanted to stay put in Gentilly Woods and who had first-rate insurance in force when Katrina struck.

The next door lot to the south tells a different story. It has been vacant since 2007 when everything on the lot except the cement slab and driveway was hauled away. Most people would agree that the lot is now an eyesore, 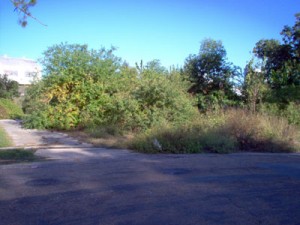 but I have to wonder what happened here. Is this a case of a displaced owner, financial ruin, family quarrel, title problems or bureaucratic morass? Maybe the cause is just the owner’s despair.

That driveway visible on the left side of the photo is where I parked most days, but I didn’t explore the lot otherwise. I have a natural aversion to most insects and reptiles,  and I was pretty sure something I wouldn’t like was alive and hungry in those bushes.

The smaller picture shows how the vacant lot and its driveway looked from the back bedroom of the house we were working on.

It appears that no one has done anything on this lot for at least two years. I say that on the basis of information I got from people in the neighborhood. It seems incredible to me, however, that those bushes could get that big in just two years. I have to admit that I don’t fully comprehend the incredible fecundity of New Orleans. 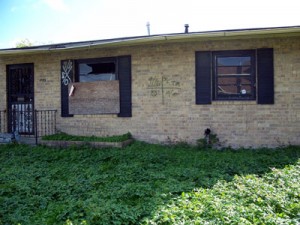 I remember joking to another member of our group that everything we saw had something else growing on it, even the mold.

The house on the adjoining lot to the north looked like a lot of the homes we saw in Gentilly, uninhabited, unrepaired and boarded up. In this case, the yard has been taken over by kudzu or something similar, although someone has paid enough attention to the property to hold back the bushes.

Across the street from the vacant lot, we saw a variation on the boarded up house theme.

Although this house was also uninhabited, unrepaired and boarded up, there is something about that new bright blue paint on the blinds and window coverings that suggests this owner will be back. Restoring this house seems obviously a work in progress, perhaps even a labor of love.

The little corner of Pauline Drive where we did our work typifies the situation in New Orleans overall. Apart from and in addition to all of the big decisions made and to be made regarding the city’s future, there are the stories of individual properties and individual property owners.

The new house across the street is already inhabited. The house we worked on should have residents in time for Christmas. The vacant lot may remain vacant and overgrown for a long time to come. The boarded up house will probably be repaired and once again made into someone’s home, but it may remain as it is for several more years. The house with the blue paint will certainly be back, sooner rather than later. 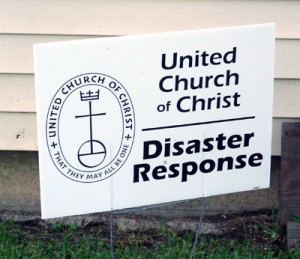 With the passage of enough years, Gentilly Woods will probably look more or less the way it used to, although by that time so many of the old residents will be gone and so many new residents will have arrived that those who remain from before Katrina may barely recognize the place.

I’m glad I went to New Orleans and proud that I got to play a part, however small, in the city’s recovery. For the six days I spent there I knew each morning, unequivocally, that just by showing up I was doing some good. Life is usually more complicated than that.

So I say again, if our church sends another group to New Orleans next year I will be part of it.