On our first full day in New Orleans, we traveled through the Gentilly and Ninth Ward sections of New Orleans. The first thing I noticed was how much of Katrina’s devastation remains. Then I noticed the spray paint markings still prominent on houses that have not been completely repaired.

The photo shows the marking on the house in Gentilly where I ended up working. According to the explanation I got, the story the spray paint tells is this: On September 16, 2005, more than two weeks after Katrina roared through the neighborhood, a disaster relief crew identified as “SCTR” (probably from a National Guard unit) finally reached Pauline Drive, perhaps by boat. Inspection of the property—probably cursory inspection—turned up no dead bodies (the Ø) and no dead pets or livestock (the N/A). It went without saying that the interior of the property was totally destroyed by lingering flood waters. For the inspectors, however, finding no cadavers and no carrion was good news.

The house marking shown is on the front of the house (behind the cypress tree in the photo below). The other significant “marking” in that photo is the line, up about three feet from the ground, where the cypress bark seems to change color. This indicates the level at which flood waters stood. The glass in the front window of the house is permanently clouded up to the same level. 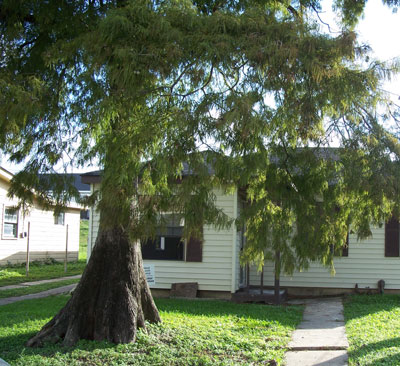 We drove to the house for the first time after completing  our orientation at Little Falls UCC Church. The orientation itself was filled with surprises, at least for me. I didn’t know, for example, that the work of rebuilding New Orleans is only about half complete four years after Katrina.

I also didn’t know that most of the work being done now is in the hands of charities, other non-profits, the faith-based organizations like ours, private contractors, and people who simply come to New Orleans to volunteer. Federal and state governments, together with the most opportunistic of the private contractors (Blackwater, Halliburton, etc.), have basically declared victory and gone home. The FEMA trailers are mostly gone now, but recovery from Katrina is expected to set the course of events in New Orleans for the next fifty to one hundred years.

Homeowners seeking assistance in rebuilding have had to make their way through a dizzying maze of programs, eligibility requirements, restrictions of various sorts, and lots and lots of paperwork. Public and private bureaucracies all work to help people get the relief they need, but they must often appear to be doing the opposite.

Our group’s work was mentored and monitored by the UCC Disaster Response Ministry which helps people who meet what are mostly economic criteria. Other relief organizations operate only in limited geographical areas. Some help only certain groups of people. Some take on projects in a limited dollar range. Some handle only certain kinds of repairs.

A homeowner might therefore qualify for several programs and have to decide which is the best fit. On the other hand, that homeowner might not qualify for any program and have to keep searching. This is often the situation for those whose home ownership is based upon informal and undocumented transfers. Cash sales without deeds and inheritances without wills or probate fall into this category. Such transfers can pass unnoticed for years, even decades, so long as real estate tax and utility bills continue to be paid.

The house our group worked on belongs to two sisters whose ownership is fully documented. We were told that they had just bought the place and moved in when Katrina struck. The story was that they hadn’t even made the first mortgage payment. Katrina spoiled everything for them. Except for what they could carry at the time of evacuation, the sisters lost all that they owned. After the storm, their house had to be gutted. All that remained of the interior was bare studding and the naked cement slab upon which the house was built. 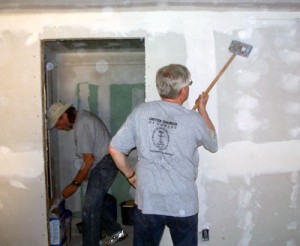 I don’t know the details of how the sisters have held onto ownership through the four years they have had to live somewhere else, but somehow they have managed it. Now they wait while team after team of volunteers, a new group every week, slowly restore their home.

Our group finished sheetrocking the walls and completed most of the taping and joint compound work. By the end of the week, the place was starting to look like a house again, but there is a long way to go. Tim, our project leader from the UCC Disaster Response Ministry, estimated that the owners may be back in the house in time for Christmas. This lengthy timeline reflects both the slow pace of the work, done mostly by volunteers without particular skills in the building trades, and the long wait for inspections by New Orleans’ harried and over-worked code officers.