I am not the person you would expect to see jetting off as part of a church mission group. I can point to a lifetime’s worth of non-participation in such activities to back up that statement.

But there is something about what Katrina did to New Orleans that has gnawed at me for the last four years. Our church sent a group to New Orleans last fall. I had planned to go with them, but Marge’s surgery kept me in Portland. So when I heard that another mission trip was planned for this year, I signed up immediately. 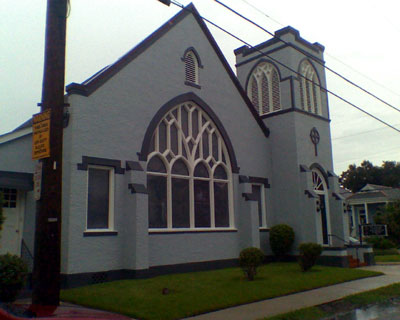 We left Portland early on the morning on Sunday, October 4th, and were in New Orleans by mid-day. After we had settled into the bunkhouse at St. Paul’s UCC Church, it was time for our first meal in the Big Easy. Somehow the group decided on a place called Parasol’s.

If you are a middle-class New Englander like me, you have to adjust to a lot of things in New Orleans. Parasol’s was, to be frank, the filthiest restaurant I have ever been in. If I had been traveling alone, the peeling paint, the sagging roof,  and the raucous noise from the bar would have convinced me to turn around without even going inside. By the time any of this began to register, however, we were already through the door and our group had taken over the small “dining room” in the back of the place. The cook was also serving up po’ boys that looked and smelled delicious. I was hungry.

After a long moment, during which I did my best not to focus on the fact that the metal-topped table where I sat was sticky to the touch, I made the decision to order one of those po’ boys, a roast beef with swiss. Served on a cheap paper plate, it turned out to be the most wonderful roast beef sandwich I’ve ever had, and I ate all of it despite my fear that by the middle of the night I would be sick as a result of it. That fear became conviction when I headed into the men’s room and found myself in the foulest, rankest public accommodation I have ever seen. As I recall, the three New Orleans cops who ate at the next table did not go near that men’s room. A woman in our group spoke to the cops and got one of them to show us the half-sleeve of tattoos he had on his right arm. We were not in Kansas anymore, Toto. 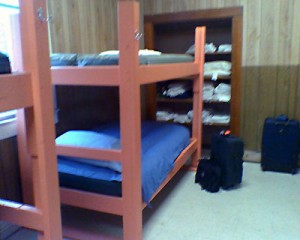 After the cops left and as soon as I could get the group to move, we left Parasol’s and headed back to St. Paul’s. Before long, I was sitting on the edge of my bunk wondering how illness would manifest itself and how bad it was going to be.

Hours passed. I called home and talked to Marge. I organized things for the next morning. I waited and I waited. Finally I got into bed and fell asleep.

One of the other guys in the group was a snorer. My father was a snorer, and Marge has mentioned to me that I snore from time to time. I thought I was pretty much impervious to snoring, but I had never heard anything like this. This snoring sounded like a  piece of heavy equipment in the process of self-destructing. It went on for hours and woke me up again and again. By about 5:30 in the morning, I had had enough and I got up. It was dark, and I didn’t have a flashlight. I was still grumbling to myself when I realized that I had not been sick! In fact no one in the group was sick.

We all felt great, and we ate breakfast.

When everyone in the group was dressed and ready to go, we got into our three rental vehicles (a minivan, an SUV and a sedan) and drove to Little Farms UCC Church for our orientation and instructions for the week.

As for Parasol’s, would I recommend the place to anyone visiting New Orleans? Absolutely. Just remember a few simple things:

2 Replies to “My Big Fat New Orleans Mission, Part I”