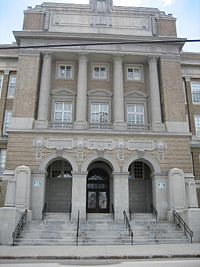 Since 1987, my wife Marge has taught at Portland High School, one of the most diverse schools in the country. For the last 15 years or so, she has read the names at graduation. It’s a formidable task because each graduating class includes students from every corner of the world. A typical class includes Bosnian, Cambodian, Chinese, Congolese, Croatian, Ethiopian, Hispanic, Polish, Russian, Rwandan, Serbian, Somali, Sudanese and Vietnamese names, along with the more familiar French, Irish and Italian. It’s a United Nations of names, and this year’s class was no exception.

As an added complication, some families, after being in the U.S. for a while,  have partly or completely Americanized their names. This is why Marge spends hours and hours in preparation. Last year a Cambodian girl whose first name was Touch (pronounced Tooch in Khmer) corrected Marge. “Nah,” she said, “it’s just Tuch, like ‘don’t touch that’.”

This year, however, a Cambodian girl with the same name wanted it pronounced Tooch. The class also included a student from a Polish family named Dziedzic. Marge consulted with a colleague who speaks Polish and learned how to say the name more or less in Polish, something like DJUH-djeetz. “Nice try with the Polish,” the smiling student said at graduation rehearsal, “but we just say DEEZ-ick.”

During Marge’s fierce battle with ovarian cancer through the winter, one of her goals was to be able to return to school in time to read the names at graduation. Pretty much everyone at the school was rooting for her because of who she is and also because there really isn’t anyone else in the school willing or able to tackle those names.

Just before Marge returned to school this spring, the principal met with a group of teachers to discuss scholarship recipients. In identifying the students, he apparently mangled many of the names. He later reported to Marge that after the meeting about five concerned teachers each approached him privately with the same urgent question: “Is Marge going to be back in time for graduation?”

3 Replies to “The Name Sayer”