As of today, I’m making a real effort to revive this blog.

I know, I know. I’ve said the same thing a dozen times before, but maybe this time is different. Here’s the deal:

Among the things I’ve been doing is spending more time with the news. As I expected, however, this is a mixed blessing. For one thing, there is the vicious, nonstop logorrhea of the Cheneys. Today, for example, cnn.com reports daughter Liz Cheney making the brainless claim that the 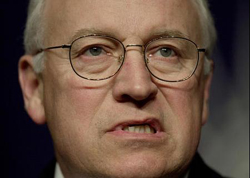 Obama administration is “siding with the terrorists” by releasing some details about “enhanced interrogation” during the Bush years. She says it doesn’t tell “the whole story.”

While it may be true that we still don’t have the whole story, the material being released will tell a whole lot more of the story than the Bushies ever did. Liz, like her Dad, seems to be much, much more concerned about appearances than about reality. So, now that some of the story is coming out, Cheney fille starts complaining about incomplete disclosure.

Not, you understand, that she would like complete disclosure either. Like her father, she doesn’t want any disclosure at all! None. Zero. The apple, as they say, doesn’t fall far from the tree.

By virtue of what I’ve written here, of course, I open myself to the Bush/Cheney Right’s usual hectoring condescension. In their view I somehow hate America and, worse, am “naive.” The implication is that it’s asking too much to expect POTUS (and VPOTUS) actually to live up to those cherished American ideals we hear so much about.

I beg to differ. Even Dick Nixon didn’t try to justify torturing people!

On the other hand, maybe I have been naive. So I’m done trying to be open-minded about the Cheneys. Cheney père says he prefers Rush Limbaugh (a talk radio gasbag with a drug conviction) to Colin Powell (a decorated military hero with a decades-long record of public service) as a Republican leader.

And there you have it. You are known, Mr. Cheney, by the company you keep.

5 Replies to “Clouding the Issue with Facts”