Did you ever wonder about that expression, “the greatest thing since sliced bread”?

No? Neither did I, but that all changed when I received an e-mail from Aaron Bobrow-Strain, Assistant Professor of Politics at Whitman College in Walla Walla, Washington. Here’s what Prof. Bobrow-Strain had to say:

I am working on a book about the history America’s long love-hate relationship with sliced white bread—a story about how and why consumers get emotionally attached to processed foods. As part of this, I’m collecting stories and memories, particularly from Baby Boomers (or earlier generations), about white bread.

I’m hoping that you might be able to help this effort, either by contributing your own tales, or by helping me reach a broader audience with this request. I would appreciate any help you can offer.

Thank you in advance

Overall, my mother was an indifferent cook. Part of the reason for this, I’m sure, was that she really couldn’t tell the difference between excellent food and mediocre food. The result was that a lot of wretched meals were served up at our house with a fair amount of pride. My father judged food solely on the basis of quantity. If there was a lot of something, then it was good.

But there was one notable surprise about my mother’s cooking: she baked superb white bread and dinner rolls. The reason for this was that she had been taught how to do it by the chef in a summer resort hotel where she had worked as a waitress before she and my father were married. As I understand the story, she had passed diners’ compliments along to the chef about the excellent bread and rolls he prepared. He asked my mother if she would like to learn how to do it, and she said yes—more likely because she liked the attention than from any interest in food preparation.

She was, however, always a good student. The chef taught her to understand bread at a deeper level than she could explain. She didn’t even bother with a written recipe. In anyone’s kitchen and with any oven, her bread always came out the same, and it was always fabulous.

Family and friends were always asking her to bake it, and she was usually happy to accommodate them (she liked the attention). Her own lack of discrimination, however, meant that we got a lot less of her bread at home. Instead we got Wonder Bread and Sunbeam Batter-Whipped Bread and their store-brand equivalents. This was the stuff that my friend Bill would squeeze into gummy balls for use as fish bait. 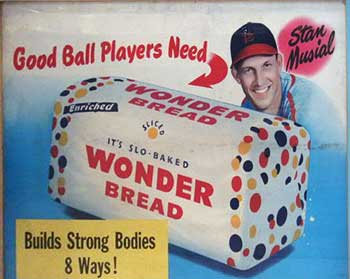 I know for a fact that Mom was the one who bought the Wonder Bread. My parents were rigorously conventional in many ways: Dad brought home his paycheck, and Mom ran the household. She was the one who did all of the grocery shopping and who made every single decision about what food was in the house.

One day about ten years before she died, I asked Mom to explain to me how she made bread. I hoped to be able to write a recipe that would produce a reasonable facsimile of her bread. My idea was that while she made bread and talked about what she was doing, I would write down what she said and did. I thought the recipe would emerge naturally (and definitively) from the notes I took, but I was doomed to failure.

For one thing, her process absolutely defied quantification. She started with two cakes of yeast, a cup of water and a cup of scalded milk. Happily I wrote:

but no other measurable quantities were involved. She added salt and sugar by pouring them into her hand and considering how the quantity appeared.

She added flour by the scoop until there was “enough.”

“It’s easy,” she answered, holding up the dough. “You add flour until the dough falls off your hand, just so… Then you knead it.”

“Here,” she said, opening the oven. “Roll up your sleeve and hold your forearm here by the oven. That’s the way it should feel when the oven is right.” I looked at the oven dial and guessed 375°.

“So, how long should it bake?”

“Bake it until it’s a nice golden brown,” she explained. “Be careful not to overcook it.”

To this day, however, I puzzle over how it was that the woman with bread magic in her hand and eye thought Wonder Bread was just as good.