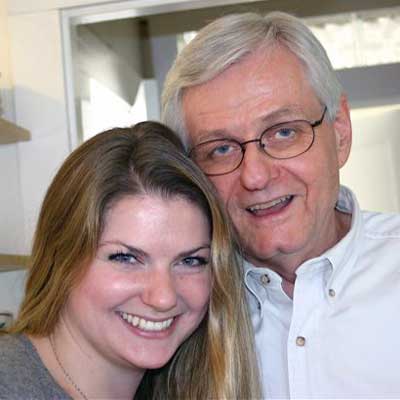 For the last month or so, I’ve moved my blogging to the Caringbridge.org site that details Marge’s progress in her fight against ovarian cancer. That’s the compelling story in my life right now, but it’s not the only one.

Another ongoing story for me, and one that belongs on this blog, has to do with faces. The picture here, for example, shows me with my daughter Elizabeth and was taken last Saturday. We are wearing our game faces here. Among the many traits we share, however, is a tendency to drift into private thought during quiet moments. In such moments our muscles relax and faces slip into an expression that might signify despair in another context. The result is that we are often interrupted by concerned friends who conclude that something is terribly wrong. Sample dialogue:

ME: (saying nothing because I’m a million miles away in thought)…
FRIEND: Pete! Oh my God! What’s wrong?
ME: (startled) What? What are you talking about?
FRIEND: You look absolutely stricken! Are you OK?
ME: (confused) I, I don’t understand…

Because this sort of thing also used to happen to my mother, I guess the “stone face cum sightless stare” counts as a family quirk. Current research documents the close relationship between mood and facial expression. That’s just common knowledge. The surprising new idea, however is that facial expression is mood, not just a reflection of it; that the configuration of facial muscles at any given moment determines the mood which the mind/personality will experience; that mood, in short, is something that is pushed into the mind–not something that flows out of it. The whole “let a smile be your umbrella” school of thought seems to be based on an intuitive belief in this principle, but I have to insist that it isn’t the whole story.

I’m more concerned than usual about this right now because during the course of Marge’s cancer treatment I do have stricken moments. I don’t want to squander my friends’ concern for me by looking stricken when I’m, for example, only idly wondering who decided which way “clockwise” would be or whether a necktie knot could be formed from inelastic material or why German uses “sie” as so many different pronouns if it’s supposed to be so damned precise.

It’s a pretty good idea for me to have my picture taken fairly often so that I can see how I’m doing with this. That photographer on Saturday, for example, had to snap the picture three times before he caught me with a facial expression he considered acceptable. I mean, come on people, it was a baby shower. Reveries happen even there. When he tried to take my picture I was just wondering how it came to be that in the years since Elizabeth was a baby, so much baby equipment came to look as if it was designed by Klingons.

5 Replies to “Keeping a Game Face On”