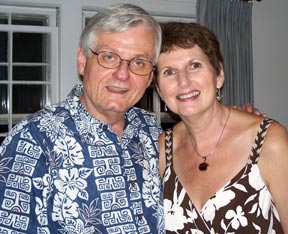 Our actual anniversary was back in June, but we finally got around to having a party a month or so ago. The whole thing was planned, executed and mostly paid for (!) by Elizabeth and Marge’s sister Dodie. It was a relaxed evening (cf. Hawaiian shirt) and a good time. The last month, however, has been jammed up with news and events, good and bad. More about that another time. For now I just want to remember that gentle summer evening in August when our old friends gathered to marvel at the fact that we are still smiling after 40 years of marriage.

Some of the guests were people we hadn’t seen in some time, including our friend Kathy, the widow of my old friend Gary. The card Kathy had made for us brought me literally face to face with myself of nearly 35 years ago. Gary, you see, was a photographer, one of the few people I’ve ever known who bought a nice camera and then went to the trouble to learn how to use it. He left his photos in pretty good order, too, so that when Kathy looked through them before the party, she found this one. 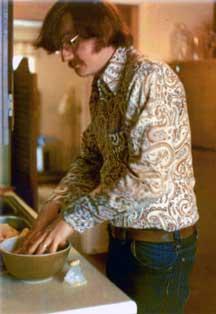 Gary took this picture in about 1974. I seem to be making meatballs. The bowl shown in the picture, gone long ago to fractured crockery heaven, was the one I always used for meatballs. The intent look on my face suggests that I was attempting to channel my grad school friend Had who always assumed the identity of “Dr. Linguini” when making meatballs. The whole Dr. Linguini bit might strike the more sensitive among us as ethnic slur now, but it was great fun then.

I vaguely remember the gawd-awful shirt, but I honestly do not remember ever having been so thin, or so young. By my best calculations, I am 27 or 28 in this picture. Who the hell was I? What did I feel? What did I believe? If I ever tried to imagine myself at 62, did I get even one detail right?

Writing this now reminds me of going through old photos with my mother. Again and again, she would shake her head and say, “I just don’t remember.” At the time I thought it was her dementia, but now I wonder if it wasn’t just time itself. The person I am today is molded from the person I was yesterday. I’ve reworked that clay so many times now that its earlier shapes are gone.

I look at this photo and say, “Yup, that’s me,” but I am no longer the person in the picture. I don’t even know that person anymore. I know where he lived, who his friends were, how he spent his time. But he himself is somehow just another ancestor.

The supreme oddity, however, is to look at this “ancestor” and find myself wanting to say, “Get your hair out of your eyes, boy. And pull up your pants before they fall down!”

But he never would listen to that kind of talk from anyone, not even from me.

2 Replies to “Who Are You, Former Self?”