A flash flood would just about put the cap on our almost-kinda-sorta summer. With the exception of a single day here and there, the whole summer has been gray and wet. The National Weather Service now tells us to expect 1-2″ of additional rain over the next 18 hours or so. 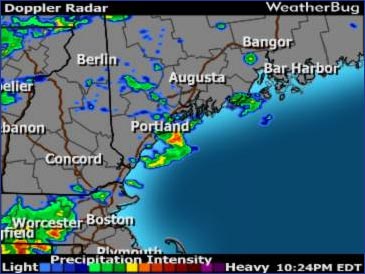 Now, I know for a fact that there are other places in the country that could really use some of this water, but no. We’re gonna get it all right here on the southwest coast of Maine.

Weather radar tells the story. That bit of nastiness offshore from Portland is probably what I begin to hear booming in the distance as I write this.

The lawn I was proud of back in the spring has been soggy for so long that it is beginning to give itself over to moss and broad-leaf weeds. The backyard we worked so hard to prepare for summer has been just about unusable. No one has been in the pool for close to two weeks.

And to think that not that long ago I was whining because commitments of various kinds were filling up the summer so that the camping trip we talked about back in the spring wouldn’t happen! Suddenly, it doesn’t seem so bad not to be huddled in a sodden tent. Marge and I did that for a week decades ago. It’s nice to have had the experience because it makes a good story, but once around is a lifetime supply.

As for flash floods, I saw a real one in Oklahoma in about 1976. The house we were renting was built on a slab and had a slider into the back yard. As rain fell at something like 10″ per hour (!) the water built up against the side of the house so that the glass door looked like the side of an aquarium. I spent a busy half hour shoveling water out of the garage. I don’t need to see any of that again either.