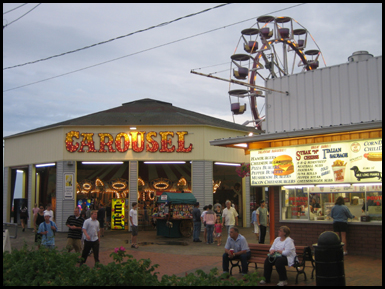 On Saturday, we drove down to Old Orchard Beach, a place we visit every five to ten years. Geographically, it isn’t far away, but it inhabits a different reality. The town is an old-time summer resort destination of the honky-tonk variety—complete with sleazy amusement park and vendors selling things like death metal band T-shirts and tattoos. Years ago, “the pier” was a destination in itself, with a performance venue that attracted all the stars of the Big Band era. A fire, however, took care of most of the pier. What remains of it is tacky, crowded and generally depressing. Most of the summer businesses are run by people who work at Old Orchard in the summer and in a warm climate in the winter. In the past, many of them were Lebanese and Syrian, but I have no idea of the ethnic groups involved these days.

In recent years, year-round residents finally wearied of the town’s seamy reputation and have managed to corral the vice industries. Gone from the midway, for example, are the topless joints, the biker bars and the women willing, for a modest consideration, to make a boy into a man.

In the past, the hotels, motels and rental cabins of the town were filled all summer long with visitors from Quebec and New Brunswick, and you still hear a lot of French on the street. We ate beach pizza served to us by a Russian waitress, took a walk on the beach (seven miles of perfect sand!) and strolled through the amusement park.

Against her better judgment, Marge rode with Elizabeth and me on the roller coaster. Marge is a woman who does not enjoy carnival rides. She regretted her decision and began screaming almost from the moment our car began to climb. I used to like carnival rides in small doses and had expected to enjoy the ride a lot more than I did. As a matter of pride, I do want to stress that I didn’t scream or lose my pizza, but I was dizzy by the end of the ride. It just wasn’t much fun, and the damn tickets cost more than $4.00 each! It will probably prove to have been the last carnival ride of my life.

Elizabeth, who has always had the stomach of an astronaut when it comes to such things, was pretty disgusted with both of us. And only partly because she had bought the tickets.

In the past my association with the town was that I worked there as a bank teller during the summer of 1966, between my sophomore and junior years of college. The pace at the bank was frenetic. The days were long and the pay was low, but the job was the first “white collar” experience of my life.

I tried to be serious and professional at all times and had some modest success at it. Inside my conservately tailored suit and carefully knotted tie, however, I was a 20-year-old guy. Thus it was that on the day a young woman in a convertible wearing only the top of a bikini, presented a check at the drive-through window, I smiled (suavely, no doubt) and cashed that check.

When the check was returned to the bank as worthless a few days later, I learned that there were three things about it to which I had been temporarily blinded by the view from the high vantage of the drive-through window:

For the rest of the summer a teller named Linda covered the drive-through, and the office manager made a lame remark about New Zealand every time he saw me.