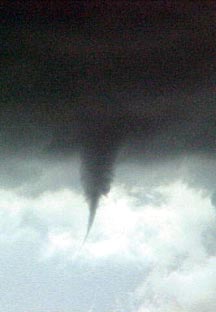 Tornadoes are extremely, make that extraordinarily, rare here in Maine, so when the NWS announced a watch yesterday I didn’t think the storm would really hit us. It turns out I was right, although we got some torrential rains. Parts of New Hampshire weren’t so lucky.

In retrospect, I’m surprised to have regained my former cavalier attitude toward severe weather events, particularly tornadoes. I’m surprised because I have lived in Oklahoma, in that part of the country that calls itself “Tornado Alley.”

When we moved there I didn’t know what tornado watches and warnings were. I had never seen a tornado and never thought about what being caught in a tornado would be like. We had only been in Tulsa a few months when all that changed. In a nutshell, I learned the following in about half an hour:

Tornadoes are to weather more or less what Machiavellianism is to politics or the fictitious Borg (“Resistance is futile”) to the equally fictitious Federation of Planets. As for Machiavelli, on the subject of permanently defeating recalcitrant rivals he wrote, “If an injury has to be done to a man it should be so severe that his vengeance need not be feared.” Similarly, if a tornado hits you or even comes close, you will not want to tangle with one again.

Luckily for us, the tornado that taught me all that was airborne, like the one shown in the picture, and so it passed over our house without doing any damage to us. When the funnel first became visible in the sky, our neighbors went out into the street to watch it and, presumably, to plan their strategies. I went out, too, and learned from them that there are basically two choices: you can hide, or you can run. There are rules that apply to each.

In a house built on a concrete slab, like the one we were renting, the place to hide is the bathtub. Barring a direct hit on the tub, you are likely to survive even a tornado’s total demolition of the house. The downside of the idea is that a one-bathroom house provides safe hiding only for one. You choose hiding, by the way, only if the storm is unlikely to hit you, or if you have no time to run. As a first-timer, I briefly considered hunkering down in the tub with a bottle of bourbon, resigned to my fate. By the time I’d formulated this plan, however, the funnel had moved on. Tornadoes are fast.

That’s why if you run (drive, actually) from a tornado the idea is to travel beside the storm, rather than trying to head directly away from it. You just don’t want to race a tornado. The idea is get out of its path because in a normal car on a normal road, you will not be able to outrun the funnel.

Hmmmmm, this turned out a lot longer than I expected. I haven’t thought about these things for years, but now that I’ve been reminded I think I’ll pay more attention to the next tornado watch that comes my way.