And far into the night he crooned that tune.
The stars went out and so did the moon.
The singer stopped playing and went to bed.
While the Weary Blues echoed through his head.
He slept like a rock or a man that’s dead. 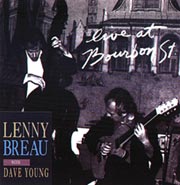 I was about 20 years late in “discovering” Lenny Breau. Lenny was born in 1941, just five years before me, in Auburn, a small city about 30 miles from Portland where I was born. He lived in Maine until 1957, when his family moved to Winnipeg, Manitoba. Lenny was murdered in 1984, when he was living in Los Angeles. Somewhere along the way he became the finest jazz guitarist I’ve ever heard.

I first learned about Lenny in the late 1970’s, but for some reason my ears just weren’t open to him. A few years ago, I was searching online for an mp3 of the The Jamies’ 1950’s hit Summertime, Summertime. One of the “hits” my search turned up was Lenny playing the Gershwin Summertime. I played it over and over and finally tracked down and purchased the CD that it came from.

Summertime is a song I learned to play nearly 50 years ago, and I thought I knew it. I stopped playing it years ago because it had become such a cliché. Listening to Lenny, however, I felt as if I had never heard the song before. If Lenny were alive now, he’d be 67—still playing way out ahead of everybody else, still taking old standards and finding things in them that no one ever heard before, and doing it every single night.

I wish I’d gotten to know you, Lenny. You probably couldn’t have turned me into a genius like you, but I’d have made a hell of a fan.