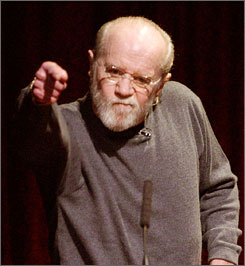 I would never have called myself a Carlin fan, but I was surprisingly affected by today’s news that he is dead. His classic “Seven Dirty Words” routine was a cultural contact point that worked across the last two or three generations.

I admire Carlin because he apparently never considered anything like retirement. He was up on stage “tellin’ it like it is” right to the end.

Some of his material seemed a bit obvious to me, but it had a way of speaking truth to power, as the saying goes. That made it important even when it was a little silly. Carlin had a kind of perpetual hippie sensibility that I never shared, but his name is one that I’ve known for 40 years. And now it isn’t attached to anyone living.

There is also the fact that Carlin was only 71. That’s right, I just said “only” 71. Sure, that’s past the Biblical three score and ten, and I’ll admit that until quite recently 70-anything sounded old to me. The thing is, I turn 62 tomorrow. Carlin was something like 9½ years older than I am right now. It’s hard for me to jam the old man hat on Carlin’s head if I’m not ready to wear it myself.

And I’m not ready.

The joke a few years ago was that “60 is the new 40.” Utter nonsense, of course. Nonetheless, 60 isn’t old any more. And if that’s the case, 70 isn’t all that old any more. So the world has lost a very funny, not-all-that-old man.

We’ll miss you, George, but they can’t censor you now.