Two days ago, Marge and I marked our 40th wedding anniversary. When I think about all the things we’ve said and done through all those years, it seems like an impossibly long time. From other points of view, however, the time has passed in the blink of an eye. 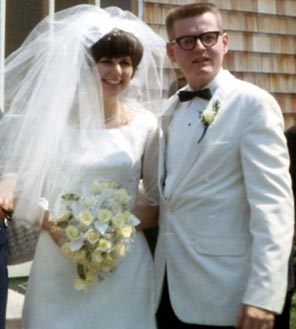 On our wedding day in 1968, I was about to turn 22. Yep, that’s me in the Buddy Holly specs and the ill-fitting jacket.

As my birthday approaches again, I’m about to turn 62. If you don’t remember 1968, take a minute to read through that year’s timeline of events. It was both wonderful and frightening to be young then, to dream dreams and make plans for a future that we feared might never come.

I have two memories in particular of our first apartment, one trivial and one momentous.

On the trivial side, I recall that the sewer pipe for the toilet upstairs came down through our kitchen. The landlord, in an attempt to conceal the pipe, had covered it with the same ferociously cheerful wallpaper he had used on the walls. Every morning as I ate my breakfast at the kitchen table, someone upstairs would flush. The pipe was noisy, and the sound was appetite-killing in the extreme.

On the momentous side was the Democratic Convention in Chicago. Marge and I sat holding on to each other in sorrow and horror as the television showed us Mayor Daley’s riot police clubbing our people on the streets of Chicago. We wondered how the generation of our parents (the so-called “Greatest Generation”) could hate us so much. It was a question we never were able to answer.

A lot happened during the first ten years of our marriage. I served four years in the Air Force. Marge worked for a spell as a telephone company service rep. We went to graduate school at the University of New Hampshire. We taught high school English for a year, then moved to Oklahoma.

In 1978, Marge and I were still living in Tulsa. Marge’s dad passed away. She was in her third year of teaching ESL at the University of Tulsa, and I had just completed my first year of law school. We desperately wanted to have children and had redoubled our attempts to solve our infertility problems.

During the next ten years, everything in our lives changed again. Elizabeth was born in 1980. We moved back to Maine, and Marge became a stay-at-home mom. I began practicing law. We joined the church we still belong to and bought a modest home here in Portland.

By the time of our 20th anniversary in 1988, Elizabeth had finished second grade. Marge was teaching ESL at Portland High School (where she still works) and I had opened a small law office of my own.

In our third decade together, we experienced more life transitions. By 1993, I had had to admit that I couldn’t go on trying to practice law. I took me a year to close down my practice. I tried to remake myself as a computer scientist by going back to school full time in the spring of 1994. I gave it up after that semester because it was just too difficult for me. I had interest and enthusiasm, but the math brain cells I once had seemed to have died.

That summer, just days after Elizabeth’s 14th birthday, my father died just before midnight on July 15th. Six hours later, my mother went into massive congestive heart failure. Her life hung in the balance for several days. On the evening of July 16th, my father’s brother died. Marge and I stood in our living room holding each other and saying, “What next? Why us? How long, O Lord?” Nothing bad came next. It hit us because sooner or later everybody gets a turn. And it didn’t last long.

Also in 1994, Marge was diagnosed with celiac disease (gluten intolerance), and that has changed the way we do just about everything in the kitchen.

In the spring of 1996, we moved to our present home, and my mother (identified by then as a dementia patient) moved in with us. I began working for the Maine State Bar Association and drove 120 miles every workday.

In 1998, Elizabeth graduated from high school. In the fall she left for college. The day we drove her to the campus was awful. We cried half the way home. A few weeks later we moved my mother to a nursing home because she could no longer be left alone, even for a few minutes. Our three-generation household had completely collapsed, and just the two of us remained.

Mom lived until the following March when she died gently and peacefully. The cause of death was her 13th episode of congestive heart failure. I think she died when she did because she was no longer able to remember why previously she had fought so hard to survive.

Our fourth decade has been filled with most of the transitions and challenges people our age typically face. I left the bar association in 2001 and became, for a while, a freelance tech writer. In February of 2002, we went on the Caribbean cruise we had talked about for 20 years.

The following May, Elizabeth graduated from college. She lived at home with us for the next year as she worked on a U.S. Senate campaign and planned her next move. That turned out to be teaching ESL in New York City, where she has lived for five years. She’ll be with us again for much of this summer, however, as she prepares to begin graduate school in Boston in the fall. She has been a joy to us from the day she was born. We’ve always considered it a privilege to be her parents.

This is probably why we had unreasonable and unreachable expectations when in the fall of 2003 we became the foster parents of a teenage girl named Ashley. The relationship lasted until last summer when we all had to agree that our differences had become so great that we walked on eggshells around each other all the time. Ashley has now completed her junior year of college. We haven’t heard from her for almost a year. She is probably as sad, angry and hurt as we are that in the end we just couldn’t make it work.

But the wheel keeps turning. Last December, Marge’s mother moved in with us. Unlike my mother, Betty doesn’t suffer dementia. She’s glad to be here, and we’re glad she’s with us because we don’t have to worry about her.

Over the last four or five years, death has begun to claim some of our friends. What was once impossible has become inevitable. Yet as we grow older and aware that the time left to us to be together grows shorter, we also become closer. Our love for each other broadens and deepens.

Joan Didion, in The Year of Magical Thinking, wrote that marriage isn’t just about love. It’s also (perhaps mostly) about memories and time. The incredible richness of a long marriage arises from shared memories and shared experiences.

As of today, Marge and I have been married 14,613 days. Have we been deliriously happy with each other every single minute of all those days? Well, of course not. You don’t build and maintain a successful marriage by checking your brain at the door. The road we have traveled hasn’t been any smoother or easier than anyone else’s.

I think what separates us from couples who drift apart is that we have never seriously doubted the importance and value to each of us of being a couple. Like everyone else, we have worked to preserve what we value.

2 Replies to “A Ruby Wedding Anniversary”