Right-handers are all alike; every southpaw is left-handed in his own way.

It is almost always true, but In the fall of 2003 I met a person who is left-handed in almost exactly the same way I am. I was surprised for all sorts of reasons. For one thing, I had waited 57 years to meet such a person. For another thing, the person in question turned out to be a 17-year-old girl. Having waited only 17 years to find someone similarly sinistral she was a whole lot less excited about the discovery than I was. Or it may just have been that 17-year-olds are so often bored by almost everything except each other.

Anyway, if you are of the right-handed persuasion, you may be wondering what I’m talking about. The fact is left-handedness is very rarely absolute, although my daughter Elizabeth may be an exception. She says her right hand and arm are there mostly for symmetry, but we lefties are made of exceptions. Left-handedness is a continuum, and the term left-handed therefore generally applies to any hand preference that is in any way not pure right-handedness. This means that left-handed has the same relationship to right-handed as black does to white in American racial politics.

I won’t even get started on the bum rap lefties have always gotten in general. The French call left gauche; the Romans called it sinister!

Trying something new has always been an adventure for me. Sometimes I know right away whether I will do a thing left or right, but sometimes I have to try it both ways. Here’s a partial list to show you what I mean.

Although many things change in education, some things do not. For example, no one teaches lefties how to write. We’re on our own. There doesn’t seem to be an explicit penalty for left-handedness anymore, but I came along in school at the very end of the days when teachers believed that everyone was really right-handed. Some of us just needed to have the fear of God put into us to realize it. 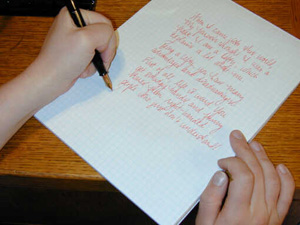 Faced with this kind of pressure, left-handed kids adopted a number of strategies. I suppose there were the faint hearts who knuckled under and learned to write right-handed, but I never knew any of them. And that wasn’t my response. I developed a peculiar way of gripping a pencil that enabled me to write with the forward slant of a rightie without having to turn the paper upside down to do it. My grip, in fact, was almost exactly like the one shown in the picture. I didn’t know that anyone else held the pen the same way I did until I did an image search for this post.

Anyway, years later, I realized the downside of this grip. The result of my frantic, yet forward-slanted, note-taking while I studied for the bar exam after law school was a neurological injury to my left hand from which I have never fully recovered. Over the last few years, I have grudgingly begun using my right hand to write. I don’t enjoy it, but I find that I can do it. I imagine my second grade teacher pursing her lips triumphantly and saying, “This is precisely what I hoped you could avoid, Peter.”

Another change is recent. After using a computer mouse for more than 15 years, I have developed a repetitive strain injury. I am now coming to terms with mousing with my left hand. I don’t like it much, but I can do it. It’s exactly the kind of switch that those of us of the left-hand continuum can accomplish without much fanfare.

But how can it be so damned hard for a leftie to learn how to do something left-handed?

5 Replies to “Give That Boy a Hand”