Writing about black flies yesterday turned my thoughts to my old friend Gary by way of a very short series of associations. Gary was a fly fisherman and a Registered Maine Guide. As a fisherman, he had to make some sort of truce with the black fly. As a guide, he used to say, “I like black flies. They keep the tourists away.” It wasn’t true on either count: nobody likes black flies, and tourists were Gary’s source of work as a guide.

Gary and I were friends for forty years, from the fall of 1963 when we both crashed the same frat party at the college we both later attended, until he died in his sleep in January of 2004, just a few days after his 59th birthday.

Near the end of my junior year of college, Gary and I tagged along with the archeology class to Little Chebeague (shuh-BEEG) Island in Casco Bay, for a one-day “dig” in the Indian shell heaps found there. Maine Indians summered on Casco Bay islands from time immemorial, living mostly on seafood, and the shell heaps were their garbage dumps. The surviving shell heaps on Little Chebeague were supposedly begun centuries ago and used well into Colonial times.

It was a beautiful day in May, and Gary and I had no real responsibility to participate in the “dig.” We spent the morning exploring the island. On the beach, Gary found a piece of green glass. We immediately recognized it as the bottom of a Coke bottle.

Gary seemed lost in thought for moment, then broke into a grin. “Do you know how to knap an Indian arrowhead?” he asked. 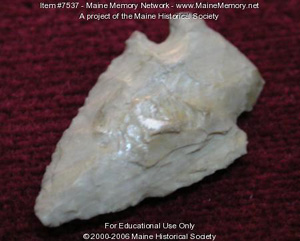 I confessed that I had no idea what he was talking about.

Without another word, he picked up a beach rock and began using it to chip away at the Coke bottle bottom. “This,” he explained, “is knapping.”

In about ten minutes he had transformed the Coke bottle bottom into a perfect, translucent green arrowhead. “Now,” he said, “we have to wait for just the right moment.” Once again, I had no idea what he was talking about.

He put the arrowhead in his jacket pocket and we walked back to the shell heap where the archeology students were working. Soon it was time for lunch, and the students hurried out of the shell heap to begin eating the sandwiches they had brought with them.

Gary brought out the arrowhead and discreetly dropped it onto the shell heap as we walked away.

After lunch, the students went back to their “dig.” They were starting to find some fairly interesting things. A knife that seemed to have been carved from a deer antler. The rusted remains of an iron axehead that the Indians must have gotten through trade with colonists. A few bits of broken pottery. A barbless bone fishhook. A few ordinary arrowheads like the one shown here. And, finally, the most miraculous discovery of all: a translucent green arrowhead.

There was an uproar among the students with everyone talking at once and crowding around the kid who had picked up Gary’s arrowhead. Ignoring Sherlock Holmes’ sound advice to investigators, people began “reasoning ahead of the facts” trying to figure out where the arrowhead had come from.

Coke bottle green was instantly recognizable in those days, but the archeology students refused to see it. Was the arrowhead ancient? Was it made from obsidian? Or was it emerald? Could the Indians have made it? How could they have gotten it from someone else?

Gary let this go on for a few minutes, then couldn’t contain himself any longer. He explained the trick, then made another arrowhead out of a piece of white beach glass while everyone watched. Not much digging got done after that. I suspect that someone took the glass arrowheads home as souvenirs of the dig.

We finished our island day by flagging down a passing lobster boat. We bought lobsters and clams and steamed them on the beach, over a driftwood fire.

Years later, I told this story at Gary’s funeral because it so beautifully captured his knowledge and skill, his great sense of fun and his utter lack of meanness or malice. I had to stop quite a few times during the telling to pull myself together, but no one criticized me for it.

I have a couple of redwood whales that Gary carved for me years after the day on Little Chebeague, but I wish I had that beautiful green arrowhead.

2 Replies to “The Arrowhead Maker”