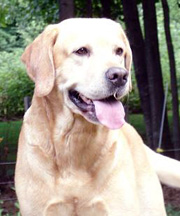 We drove to Bethel, Maine, this morning to look at a couple of adult Labrador retrievers who needed a home. We drove back to Portland early this afternoon with a brand new friend. Mike is 5½ years old and is about to spend his first night in his new home.

So far, so good. We’ve learned in the last few hours that Mike doesn’t like puppies and that he won’t climb stairs. The first is not a problem. As much as I love dogs, I have no intention of ever starting with a puppy again. I’m told that most people shy away from taking older dogs, but, as I told a woman who spoke to Mike while I was walking him this afternoon, “I’m kind of an older dog myself.”

We haven’t had a dog since August of 2005 when the vet had to come to the house and take poor Dougie away. Doug was a black Labrador with so much personality that he was almost human. When the time came to make that final call to the vet, I cried as if I were losing a child.

It’s probably no surprise that I’ve been holding out for a long time, saying I didn’t want another dog, saying I couldn’t stand to have another dog put down. And those things were true. About a week ago, however, I realized that their truth was becoming less important every day. Last Saturday, we spent a few hours online visiting dog rescue sites. Then Marge made a couple of phone calls and connected with the breeder who had Mike. We made the appointment to visit today. There were several dogs we thought we were going to look at, but Mike went right to work and knocked out the competition in short order.

When Mike’s owner Dave brought Mike into the room where we were waiting, Mike came to me so that I could pat him, then he sat beside Marge and put his head in her lap. The whole bonding thing, at least on our part, was pretty much a done deal at that point.

We really have to work our way through the stairs issue, however. And now, as I am writing this, Mike just tried to get up on the couch beside me. That’s a non-starter in this house. Mike’s look of surprise and disappointment tells me a lot about the life he has led up until today. After all, people have different standards that apply to statements such as “He never gets fed from the table” or “We’ve never allowed him on the furniture.” Sometimes I think those statements mean little more than, “We never fed him from the table or let him up on the furniture even once without remembering that some people think those are bad ideas.”

One Reply to “Meet Mike”