For most of my life it irritated the hell out of me to hear someone say I looked like my father. I just couldn’ see it, especially by the time I reached my twenties. He had this gigantic hooked nose; he had serious hair loss; he was 50-75 pounds overweight. End of story, right? 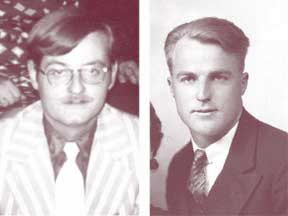 My first thought was that now, in 2008, I’d be much more likely to put on the suit the old man wore to the photographer’s studio in 1940 than those snappy, disco-ready threads I affected for my photo op in 1971.

My second thought was how striking the resemblance is between us—although he was clearly better looking than I. To get the pictures ready to display here, I used Photoshop to convert both images to the same sepia tone. That was partly to make it easy to conduct an apples-to-apples comparison of the faces. The more pressing reason, as you might suppose, was to suppress the colors in the pictures of me.

Yeah, that tie is white. Sepia won’t do anything to hide that. What you probably can’t deduce from the sepia, however is that the stripes on my jacket are gold and white. The shirt is what is now called “rich maroon.” Worse, the shiny polyester from which the shirt was made had roses woven in. I have no idea what I wore for pants with this rig—orange and lime checks, for all I know. I do suspect, however, that the pants were bell bottoms. This was also the period when I wore “earth shoes,” the ones with the negative heels.

Anyway, it was probably the difference in styles that blinded me to how much I did look like the old man. There was also the fact that the picture of me was taken at a time when my father and i didn’t have much to say to each other. The circumstances of that make another story which, with any luck at all, I will never get around to telling here. The point is that I believed I did not look like him and therefore could not see that the old “physog” is pretty similar on the two of us.

Looking at the photos together last night, Marge agreed that the resemblance was strong, although, she tenderly opined, “you look more hapless.”

Thanks for your input, my treasure.

3 Replies to “Sometimes Believing is Not Seeing”