No memory of having starred
Atones for later disregard,
Or keeps the end from being hard.

Better to go down dignified
With boughten friendship at your side
Than none at all. Provide, provide!

Take care of me, Mick Jagger pleads. Take care of yourself, Robert Frost replies. Which voice resonates more compellingly? Which voice is more like your voice right now?

I never was much of a Stones fan (in the ’60s you couldn’t really be a Stones fan and a Beatles fan) but in Gimme Shelter Mick Jagger sang for me anyway. Marge and I had parents—people who took care of us without even making us ask. 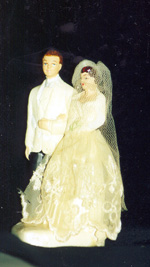 In June of 1969, we marked our first wedding anniversary. It promised to be a melancholy affair. I was in the first year of a four-year hitch in the Air Force and was stationed at Pease Air Force Base, New Hampshire.

On June 15, we had been in New Hampshire about a month. Marge had found a job welding filaments on the assembly line of a Sylvania plant and we were living in a tiny and cheerless apartment about two miles from the base.

We were together, but life seemed pretty grim all the same. We had no money and almost no furniture. When we tried to prepare an anniversary dinner, all we had was the top layer of our wedding cake (carefully kept frozen for a year), a package of frozen peas, and two

cans of Narragansett beer. We laughed about it without much real mirth.

Then, unannounced, my mother and father arrived, bringing a celebration in the back of their pickup truck—the table and chairs that Marge’s parents had given us, a hibachi, four nice steaks, some potatoes to bake, a salad, a bottle of wine, and an anniversary card with $100 in it.

These days we mostly have to take care of ourselves, but loving people have taught us nice ways to do that.

One Reply to “Provide, Provide Me Shelter”