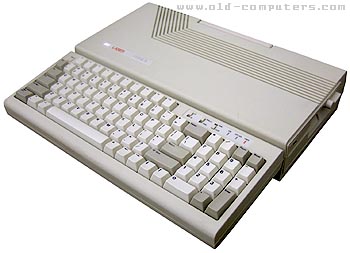 Almost 20 years ago, we bought our first computer, a Laser 128, the only Apple IIe clone that was successful as far as I remember. It came as an integrated unit with the keyboard and a disk drive (for those black 5.25″ disks) built in.

The computer came into our house pretty much over my dead body. I practiced law in those days and could sometimes feel pretty important in my three-piece suit.

Marge and Elizabeth were using computers at their respective schools and therefore had some actual information about what a computer might do for us at home. But I was having none of it. You could practically hear me harumph every time anyone raised the subject.

“What,” I asked repeatedly, “is a computer going to do for me? Why should I ever want such a thing in my home?”

“You can play games on it,” said Elizabeth. 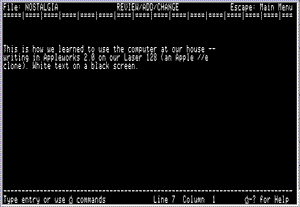 “We already have games,” I answered.

“You can do word processing on it,” said Marge.

“Why would I want ‘processed’ words?” I asked, somehow imagining that “word processing” was to writing what SlimJims are to steak.

After a few months, of course, I relented. The equipment we bought was recommended by someone Marge knew at school and cost about $2,000. We took the components out of the boxes and put everything together. When the computer booted up and the cursor began blinking at me, I had the nearest thing to a “white light” conversion experience that I ever expect to have. It was love at first sight. Since that moment I have hardly gone a single day of my life without using a computer. A game called “Oregon Trail” quickly became one of our favorites. You can still play it the Apple II way in your web browser by going to virtualapple.org.

After two or three years, we moved to a Macintosh LCII and I took the Laser 128 to the office. It seems farfetched now, but in 1993 it was perfectly possible to run a small law office with a Laser 128. Appleworks produced documents and enabled me to build a simple client database. Quicken handled the operating and trust accounts. There was as yet no reason to be linked to the Internet.

Even today, however, I still don’t like the term “word processing.” Maybe it’s because we had a “food processor” first.