The way my home office is set up, the wall across from me is pretty much covered with bookshelves. The books, I confess, are not in good order. Each shelf is a jumble of old textbooks, classic novels, “brain candy” novels, computer references, and so on. When I looked at the shelves this morning, however, my eye for some reason went directly to Let Us Now Praise Famous Men, the photo-essay classic by James Agee and Walker Evans about sharecroppers in Alabama.

My relationship with the book has always been uneasy, for reasons that have more to do with me than with the book. The copy on my shelf is a paperback edition that I bought in the ’70s for a graduate school seminar at the University of Tulsa. I wasn’t prepared for the effect the book would have on me and didn’t actually read all of it, although I did the best I could. There was something about it that attracted me and repelled me at the same time. I couldn’t quite put my finger on it.

In the seminar session for which the book had been assigned, I had nothing to say. I was always a talker in class, and my silence struck the professor as odd. During the half-time break, he approached me and asked why I wasn’t contributing to the discussion. By this time, however, I had a pretty good idea of what was wrong. It was intensely personal. I told the professor that the class probably wouldn’t benefit from anything I might say, but he wasn’t having any of it. He kept trying to draw me out, and by the end of the break I agreed to say what was on my mind.

James Agee and Walker Evans were a couple of rich boys who set out to display poverty to other Northerners of their kind in such a way that everyone could cluck their tongues sympathetically but no one would have to get their hands dirty.

In 1936, they traveled to Alabama, about a thousand miles from the environs of Harvard University, their alma mater, in order to find the noble poor. As if poverty were a Southern problem, sort of like slavery, a thing that land-owning Southerners did to less fortunate Southerners. 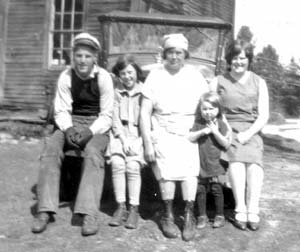 But other things also happened in 1936. My parents got married that year. They lived in rural Maine, about 100 miles north of Harvard. The town of Stow, Maine, was a dirt-poor place where people set each others’ broken bones and pulled each others’ rotten teeth because there was no alternative, a place pretty much in the backyard of Agee and Evans, the concerned poet and photographer who felt they had to travel a thousand miles to get a look at poverty.

My parents lived on $300 for the first full year they were married. They made their home in an unpainted two-room house without electricity, running water or indoor plumbing. Nobody with money gave a damn about them. For me, Let Us Now Praise Famous Men was essentially a diorama of my parents’ harsh life as newlyweds, and it made me sad and uncomfortable.

By the time I was done talking, the seminar was effectively over. Perhaps the silence in the room was partly about what I had insinuated about Agee and Evans. But mostly, I think, it was about what I had revealed about myself. In those days at TU, my New England accent was the same thing as money. Money mattered a lot in Tulsa. Everyone in the class, professor included, probably assumed that I came from money and that I naturally identified with Agee and Evans. But I identified with the sharecroppers, and I still do.

There are no photos of my parents’ wedding, by the way. The picture here shows my father, my grandmother, and three of my father’s sisters as they looked in about 1930. The little girl second from the right in the picture is the only one still alive. She is now past 80. No one in the family lives in poverty any more, but that’s where we came from.

I think that if Agee and Evans had grown up the way my father did, they would have produced a very different book.

One Reply to “Let Us Now Praise…”