Television came to southern Maine in 1953 with the arrival of WPMT, Channel 53, a UHF station affiliated with the long-defunct Dumont Television Network.

In hindsight, it’s safe to say that Dumont and Channel 53 were doomed from the start. By 1953, the big three networks (ABC, CBS and NBC – the usual suspects) had the VHF band sewn up. Every TV sold in those days came equipped to receive the VHF channels (2-13) but a tuner adapter and special “bowtie” antenna were required for UHF. Most of Dumont’s channels were UHF, and the network did better in markets where no VHF channels were available. Portland was such a market.

When word got out that WPMT would soon begin broadcasting, people started buying television sets. The TV my parents bought was a 21″ Zenith, with the UHF adapter for channel 53 built right into the set. This was a special selling point. Selling points were necessary because TVs were expensive. By my rough calculations, the price of the TV equaled about six of my father’s weekly paychecks. When it came to electronic devices, the old man figured that quality didn’t come cheap. And we were going to have a TV. The time had come.

But there were also other things to buy. For starters, you needed a roof antenna. The antenna had two functions: it made television reception possible, and it let the neighbors know you owned a TV set. This was a bigger deal than you can imagine now.

More expensive TVs (the 10 to 12 paycheck models) came in elaborate wooden cabinets and sat on the floor. Ours was a table model enclosed in a “natural woodgrain” cabinet with a dark mahogany finish. We needed a “TV stand” to put it on. My mother selected a three-legged model, in matching mahogany, with a swiveling top so that the TV could be turned easily.

You also needed a TV light. Popular belief was that it wasn’t good for the eyes to watch TV in a room with no light source besides the TV screen. Thus the TV light industry was born. Ours was a sort of ceramic aspidistra that provided indirect lighting for the room. The Sylvania company tried to undercut the TV light business by wrapping a fluorescent tube around the TV screen, the “Halo Light.” The old man’s brother, my Uncle Alfred, bought a Sylvania. For the record, and probably under the influence of the old man’s burning sibling rivalry, I always thought the Halo Light was a stupid idea badly executed. 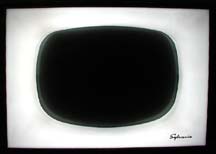 Anyway, for television viewing, you were to position yourself at a considerable distance from the TV. The rule of thumb seemed to be one foot of distance for each inch of screen size. We had a small house. To achieve the necessary 21 feet of distance, it was necessary to sit in the kitchen to watch the TV in the living room. My parents soon tired of this, and we began watching from the living room. There was no talk at all of the 21 feet after I spent a week on the couch watching TV as I suffered through mumps or measles or something. Once I was recovered, the old man claimed the couch and did his TV watching from there ever after.

With only one channel, you had no choice of programming. You were watching TV or you weren’t. The whole concept of watching a particular program came after the arrival of competing channels. So, we watched what came on. There were some surprises for me, too. For example, despite their New England prejudices against Catholicism, my parents hung on every word from Bishop Fulton J. Sheen on “Life is Worth Living.”

Bishop Sheen, by the way, sometimes really was worth listening to. One of my favorite Sheen anecdotes is this:

A heckler asked Bishop Sheen a question about someone who had died. The Bishop answered, “I will ask him when I get to heaven.”

The heckler then said, “What if he isn’t in Heaven?”

The Bishop replied, “Well then, you ask him.”

Other TV preachers got less respect in our house. My mother, for example, reserved a special animus for Billy Graham. I was never exactly clear about the reason for this, but it seemed to have something to do with his hair and with the way he “slapped” the Bible when he was preaching.

There was also Oral Roberts. In later years, Rev. Roberts went more or less legit and founded a university and so forth. In the 1950s, however, he was a TV faith healer. His show was broadcast on Sunday afternoons.

One Sunday, we watched as Roberts turned to the camera and spoke directly to his television audience. What he said was to the effect that home viewers could be healed by touching their TV set with the afflicted body part while Roberts delivered himself of a prayer of intercession.

When he heard this, the old man was off the couch in a heartbeat. He unfastened his belt, dropped his pants and backed up against the TV screen.

“Let’s see what the sonofabitch can do for these piles,” he said.

Not much, as it turned out. Coincidence perhaps, but the old man never liked TV much after that.

One Reply to “The Old Man and the TV”