People in the U.K. endure a lot of comments about their food. IMHO, not all such comments are undeserved. The comedian Mike Myers, for example, is alleged to have said, “My theory is that all of Scottish cuisine is based on a dare.” He may have been envisioning a haggis-based scenario like this: 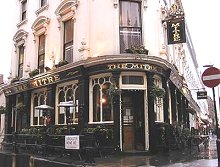 Something similar must be going on in England. It’s the only explanation I have for the mushy peas, a staple of pub food and apparently a traditional accompaniment to fish and chips.

I was sitting in The Mitre Pub in London with Marge and Elizabeth when Elizabeth and I decided to share a plate of fish and chips. The menu said something about mushy peas, but we didn’t know what that meant and didn’t pay much attention.

In due course, the fish and chips arrived at our table, looking pretty much like what you see in the picture. I’d like to say that the green of the peas was less fluorescent, but that wouldn’t be true. I have no idea how that green was achieved. 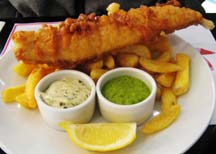 Artificial coloring seems the obvious explanation, but I really don’t know. The color, however, was only the first of three surprises for us.

I took a small forkful of the peas and was astonished to find they were served cold! Then the peculiar taste began to register, but what was it? What was it? It took us some time to figure it out. The flavor was mint!

On the flight home, I asked the English woman seated next to me about mushy peas. She drew a deep breath and explained how the things are made. You soak dried peas overnight in water mixed with what she called “a tablet of bicarbonate of soda.” Then you boil them for two or three hours, until they have cooked down to mush (hence the name). Then you add butter, salt, pepper and mint.*

She made a face and confessed that she hated mushy peas. I’m with her.

MEMO to self for future trips to London: when they offer mushy peas, just say no.

* This explains the consistency and taste, but not the toxic waste color!