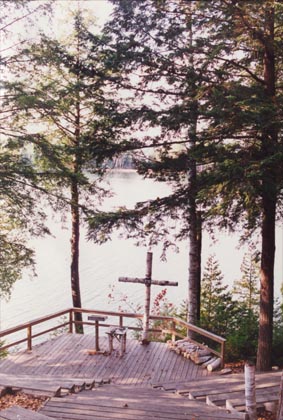 During church yesterday, the excited voice of a toddler filled the sanctuary several times. The little girl’s mom and dad faced the usual parental dilemma of deciding at what point the rights of others not to be disturbed trumped their own desire to attend worship, but I don’t know if they left before the service was over or not. By the time Communion was being served, something in those joyous cries had transported me back to September of 1982.

Our daughter Elizabeth was two that year. Marge and I had taken her to Pilgrim Lodge for a weekend of family camping with a group of people from our church. I wasn’t a natural as a family weekend camper. In all honesty, I had tried everything I could think of to get out of going. But there we were.

The weekend was planned and organized way beyond my capacity to enjoy group activities. There was no “down” time and no privacy. Every minute was scheduled. I soon found refuge in the kitchen, however, where a fellow malcontent and I ran the dishwasher. The noise level was such that conversation was impossible and therefore unnecessary. For about 45 minutes after each meal I was not required to interact with anyone, and this pleased me. Even better, I was actually receiving thanks for my willingness to tackle such a dirty job meal after meal. I could barely suppress a smirk.

On Sunday morning, everyone gathered for outdoor worship in the little chapel shown in the picture. During the service, Marge and I took turns holding Elizabeth who, despite the length of the service, was behaving perfectly. The man who was offering the sermon was someone I admired for his dedication to our church and for the good things he did in our community. As the minutes ticked by, however, I began to see that he didn’t know how to end his little homily. I mean, he really, really didn’t know.

You may remember that old movie, The Way We Were. In about half a dozen places, the camera pans back, the music swells, and you just know you’re about to see the closing credits. But then it doesn’t end. This sermon was like that. Just as I would be tying the threads of it together in my mind, the thing would sputter and skip and start up again in a whole new direction.

Those of a more fundamentalist religious persuasion than my own might suggest that the Devil began to lay claim on me at that point, but I prefer to think of it as sweet inspiration. I had already toyed with the vague notion that if Elizabeth couldn’t sit still and be quiet we would have to take her out so that she wouldn’t disturb other people. But she sat in my lap behaving perfectly—quiet, still, adorable. Relentlessly adorable, it began to seem to me. If only she would act up just a little. If only. Then it came to me, and I began whispering quietly into her ear.

“Elizabeth,” I said, “if you make noise, we’ll have to leave.” She remained silent.

“If you can’t sit still, Elizabeth, we won’t be able to stay to the end.” She didn’t move a muscle.

So much for subtlety. My little girl was a model of rectitude and was not going to be tricked into misbehaving. I thought for a minute, and the answer came to me.

“Elizabeth,” I whispered, “if you make noise so that we can’t stay here to the end of the service…we’ll have to go for a canoe ride right now.”

For a moment or two, her innocent mind grappled with this proposition. Then she threw back her head and let out a yell, and another, and another.

I leaped to my feet, holding Elizabeth in my arms, doing my best to look embarrassed and mouthing concerned apologies for the disruption to those around me. Once outside the chapel, we practically ran to the canoe.

On the lake a few minutes later, we were enjoying the languid September morning.