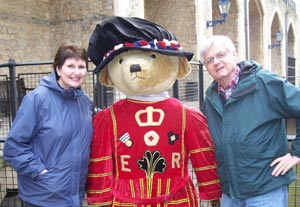 We spent last week in London and had a great time doing all the tourist things, such as posing for this picture with “Beefeater Bear” at the Tower of London. The exchange rate was murderous and, truth be told, nobody ever goes to England for the food. But we knew those things going in and didn’t let them bother us.

London is a city I could live in. I’m not sure I’ve ever said that about any other city. Perhaps it’s because so many people here in Maine are of British descent, but the faces on London streets seemed familiar to me. By the standards of mainstream America, the English, like most of us native to Maine, are plain in appearance. Walking around Phoenix a few years ago, I found myself in a world where it seemed that everyone except me had perfect hair, perfect white teeth, an unlined face, a perfect physique. And practically no history. Just about everyone I met in Phoenix had come from somewhere else. In London, just about everyone I met came from families that had lived in England forever.

The difference this makes is more than mere seniority. When you visit a place like Phoenix (or Tulsa, where I once lived for five years) you are frequently asked how you like the place. There is no verdict of history because there just isn’t enough history. Even the casual opinions of tourists carry some weight in defining the worth of the place.

In contrast, no one in London asked us how we liked the city. Instead they asked if we were enjoying our visit. The question was about us, not about the place. With more than 2,000 years of recorded history, London knows what it is. Now that I know a little about it, too, I can’t wait to visit again.