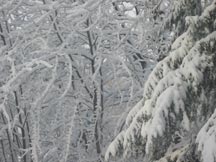 Laura Ingalls Wilder beat me to the title, of course, but the storyline is delivered year after year in these parts. Today’s storm was a real beauty – something like nine inches of new snow followed by about two inches of rain on top of it. We have had, fortunately, the luxury of not having to go anywhere today.

That wasn’t always the case for me.

Something about the particular unpleasantness of today’s weather reminded me of a Christmas night long ago. It was about 1970, I think, and I was in the Air Force, stationed at Pease AFB in New Hampshire. Halfway around the world, the Vietnam War raged endlessly on. Marge and I were practically newlyweds then, and we lived in a small off-base apartment. The whole arrangement was surreal. The Air Force was basically a crappy job I wasn’t allowed to quit. Every workday morning, I’d climb into my uniform (or “costume” – the lifers hated to hear us call it a “costume”) and drive to the base. From 7 to 4 I was in the military; the rest of the time I didn’t think about it.

Also surreal was the fact that in those days, Pease was the home of the 509th Bomb Wing.

This was the successor to the 509th Composite Group, the Army Air Corps unit that flew the Enola Gay when it dropped the Bomb on Hiroshima at the end of World War II. In 1970, those of us in the 509th were still supposed to wear the Presidential Citation ribbon on our dress blues. For that reason, I was glad I had a grunt job where I wore fatigues.

But a grunt job is a grunt job, when you want it to be and when you don’t want it to be. So, on Christmas night I was on call. At about 11 pm the phone rang. It was a poor SOB on duty in the flight control tower. An emergency beacon had gone off inside a parachute in one of the KC-135 tankers on the flight line. The KC was a military version Boeing 707, a flying gas station, a big airplane.

BEEP BEEP BEEP. The guy in the tower couldn’t turn off his headphones. He had to keep listening. BEEP BEEP BEEP. He claimed to be going nuts from it. Would I please find the offending parachute and turn off the damn beacon.

Right. It was bitter cold, the wind was howling and the flight line was covered with ice. Nowadays, you could probably stare at a computer monitor for a minute or two and identify which plane the beacon signal was coming from–maybe even which parachute. It would then be a pretty simple matter to go to the plane and deal with the beacon. Hell, maybe in 2008 you could do the whole thing from the comfort of home.

But this was 1970. I climbed into my costume and drove to the base. Once I got there, the only thing I had to work with was a portable radio that picked up the beacon signal. I had to drive up and down the flight line until I came to a plane from which the signal seemed to be stronger. Checking the parachutes on board meant opening the nose hatch of the plane, reaching up for the ladder, locking the ladder in place, climbing into the plane (very cold, very dark) and by flashlight reaching into the pack of each of the 10 to 20 parachutes to try to decide which one had a beeping beacon.

But this was not a good night. I drove up and down the flight line, but the beeps coming to my little radio never changed. I understood what the tower guy had been saying. The beeping was driving me crazy. Slowly, I began to get my mind around the hard truth that I was going to have to check every single airplane until I found the right one. There were about 20 planes on the ground that night. But at least I could turn off the radio. There might be 20 planes to check, but there would be no more beeping!

I started at the top of the flight line and I had reached the third or fourth plane when I lost my footing while try to set the nose hatch ladder in place. My feet went out from under me, and I found myself hanging from the ladder which was hanging crookedly out of the hatch door. The ladder had caught on something, but it wasn’t locked in place. My hat had blown off in the wind, and my gloveless fingers were numb with cold from gripping the metal ladder.

After a minute or two, I realized there was nothing to do but let go of the ladder. And I did. When I landed, the back of my head slammed down hard on the ice. The ladder, free from my grip, fell out of the nose hatch and crashed into my face and bent my glasses. I was cold. I had an egg on the back of my head, and I had about 16 more airplanes to check.

I got to my feet and went back to work. One by one, I checked every damned cold, dark airplane and found absolutely nothing. By this time it was about 1:30 in the morning and I was chilled to the bone. Out of ideas, I drove back to the shop and called the tower to report failure. I couldn’t find anything. Failure meant trouble, so I wasn’t prepared for what the tower guy had to say. “No problem. It was one of the big beacons from the rescue aircraft on the other side of the base. They shut it off an hour ago. So, no problem at all, sarge.”

No problem, sarge, indeed. I wasn’t a failure after all. I had simply been sent on a wild goose chase on a bitter cold Christmas night. Worst of all, I had been out there the last hour out of my own stupidity. If I had left my little radio turned on, after all, I would have known when the beeping stopped.

Ask me again in June, July or August.

One Reply to “The Long Winter”